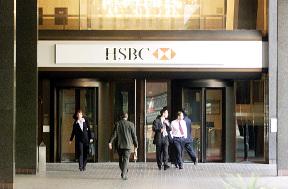 The Greek government wants to inspect secret foreign bank accounts of tax evaders such as those in the HSBC bank. [AFP]


Athens is asking for assistance to identify Greek citizens who are using Switzerland as a tax haven.

The Greek government wants to inspect secret foreign bank accounts of tax evaders such as those in the HSBC bank. [AFP]

Greece is asking Swiss authorities to lift bank secrecy practices and allow its investigators to reveal the names and details of bank accounts held by Greek citizens.

The request comes as Greece is already poring through a list of 2,059 Greeks who have put away 1.5 billion euros in the HSBC bank's Geneva branch.

The finance ministry said tax evaders owe 63 billion euros, and recovering some of the money is a key demand by the EU-IMF-ECB Troika to put up 240 billion euros in bailouts.

The government last month was able to check only 72 foreign bank accounts whose holders owe between 5,000 and 5 million euros in unpaid taxes.

It is common knowledge that many wealthy and influential people have secret bank accounts in Switzerland and in other tax-haven countries, said Antonis Klapsis, head of research at the Konstantinos Karamanlis Institute for Democracy in Athens.

"This is yet another step that shows the government's willingness to do what it takes to tackle the problem of tax evasion," Klapsis told SETimes.

Analysts said if Switzerland agrees, it will provide the key to obtaining information on bank accounts holders in other tax-haven countries, including Luxembourg.

"If this is achieved, it will be a gesture showing the government wants...