MUP: EC satisfied with pace of work on Chapter 24 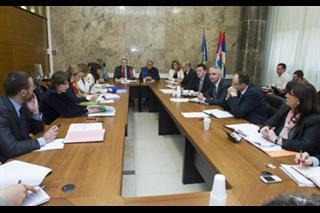 BELGRADE - Myriam Ferran, head of the unit for Serbia at the European Commission, voiced satisfaction on Wednesday about the pace of work on Chapter 24, which deals with justice, freedom and security, and offered the Interior Ministry (MUP) support for preparations for EU membership talks.

During a meeting, Ferran talked with Vanja Vukic, a state secretary at the Serbian Interior Ministry (MUP) and head of Serbia's negotiating group for Chapter 24, and Police Director Milorad Veljovic about next steps in the EU integration process and Chapter 24 that are coordinated by the Interior Ministry.

During the talks, which were also attended by representatives of the EU Delegation in Belgrade, Vukic underlined full commitment to the work and implementation of requirements for drafting an action plan, and presented the steps that the ministry had taken and a plan of actions for the coming period, the MUP stated.

European Commission officials presented further steps and actions that the Republic of Serbia will use as a starting point for harmonizing its law with the EU Acquis.

Image Courtesy of the Ministry of the Interior