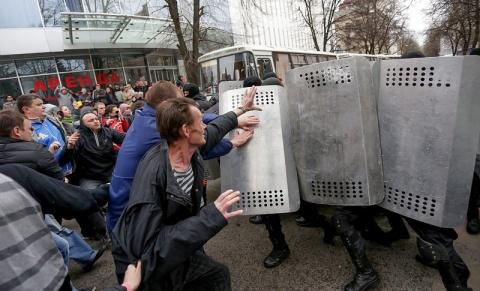 Ukraine's police has been put under huge pressure over the past months, with protests in both Western and Eastern Ukraine sometimes culminating in violence. Photo by EPA/BGNES

Three EU member states proposed Thursday that the bloc deploy a police mission to Ukraine, according to unofficial Brussels sources.

The idea put forward by the UK, Poland and Sweden is aimed at providing assistance to Ukraine it re-building its own police structures, the EUObserver has reported, citing the EU sources.

A police mission within Ukraine would envisage "monitoring, training and strategic planning".

It would focus mainly on basic police structures in Kiev, but would also try to have an impact in some of Ukraine's regions.

The joint draft proposal could be discussed by the EU's foreign ministers at their meeting in Luxembourg on Monday.

If approved, a Ukrainian mission should be launched as early as June this year.

A EU diplomat has declared that the idea has no relation to Russia's current actions on the Ukrainian crisis. He said "it was failure of judiciary and the rule of law that caused unrest at the Maidan", asserting EU expertise could contribute to the tackling of these issues.

EU's police missions, which are usually conducted under the Common Security and Defense Policy, have been carried out in Macedonia and the Democratic Republic of Congo and are ongoing in parts of Bosnia and Herzegovina, Afghanistan, the Palestinian Authority and Kosovo.