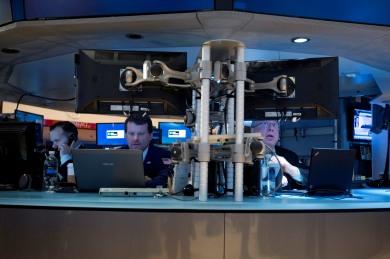 Greek bond yields rose on Friday as investors booked profits on the rally that preceded Greece's return to debt markets, with even its sought-after new five-year bond succumbing to selling pressure.

Athens, which had been locked out of capital markets for four years and was bailed out to the tune of 240 billion euros ($333 billion) as its economy faltered, received bids seven times the amount in its first sale of a new bond since before its bailout in 2010.

The transaction had buoyed other euro zone government bond markets on Thursday, but the new bonds faced a difficult birth as trading started on Friday, with investors losing their stomach for riskier assets.

"The euphoria is fading after yesterday's deal,» said Owen Callan, a senior analyst at Danske Bank.

"People are taking stock of the fact (that) while its great that Greece regained some sort of access, there is still a very long road to recovery for Greece."

Yields on the new Greek bond traded above 5 percent on Friday, compared with the 4.95 percent level at which it was issued. It had traded at lower yield levels earlier in the day, but that prompted immediate profit taking from Thursday's buyers. Yields rise as the value of the bond falls.

Although its economy looks to have turned a corner, Greece is still seen by many as a weak link within the euro zone.

The government holds only a two-seat majority in parliament, and early elections are a constant risk, with the anti

at almost 27 percent. On Thursday, a car bomb exploded...