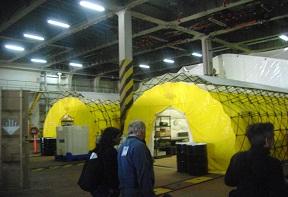 Destruction of the chemical weapons will take place in negative-pressured chambers that prevent vapors from escaping into the atmosphere. [Drazen Remikovic/SETimes]


The mission to safely dismantle the chemical weapons is part of a multi-national effort that is unanimously endorsed by the United Nations Security Council.

Destruction of the chemical weapons will take place in negative-pressured chambers that prevent vapors from escaping into the atmosphere. [Drazen Remikovic/SETimes]

A US ship has been outfitted to safely neutralise the most hazardous of Syria's arsenal of deadly chemicals which make up Syria’s chemical weapons program. It is this program which international observers said was responsible for a deadly attack last year against hundreds of civilians in Damascus during that country's four-year-old civil war.

The MV Cape Ray, 197-metre container ship, is currently in Rota, Spain, in preparation for its mission to destroy the weapons. It was made available to reporters on Thursday (April 10th) in advance of its mission.

Authorities plan to neutralise the chemicals at sea in international waters using proven hydrolysis technology. All waste from the hydrolysis process would be safely and properly stored on board until it is disposed of at commercial facilities to be determined by the Organisation for the Prohibition of Chemical Weapons (OPCW). Officials emphasised that no hydrolysis byproducts will be released into the sea or air.

The most sensitive work will be done in chambers on board the ship that are negatively pressurized – meaning that no air can escape the room during the destruction process. The technology ensures that the air and sea environment will remain secure as the chemicals are being neutralised.

OPCW deputy chief Aamir Shouket noted it is an important mission with...

The long standing issue of high youth unemployment in Greece

Bulgaria’s President: Politicians Ignore the War in the Name of Party Interest