69 years since breakthrough of Syrmian Front 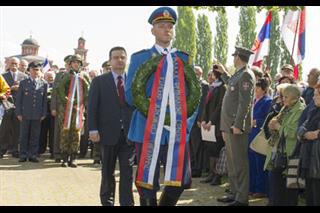 BELGRADE - Serbia marked on Saturday 69 years since the breakthrough of the Axis lines on the Syrmian Front after a 175-day campaign to liberate Yugoslavia from Nazi occupation in World War II.

The Syrmian Front campaign saw some of the most difficult and longest and most tragic WWII fighting. Over 250,000 soldiers fought in the trench battles from October 21, 1944 to April 12, 1945.

The Syrmian Front was an Axis defense line established along the western border of the Serbian region of Syrmia (Srem) after the final campaigns to liberate Belgrade and the country were started by the Yugoslav Partisans and their allies.

The Germans defended the front line heavily in desperate attempts to protect the withdrawal of its army's Group E from Greece through regions of Macedonia, Metohija, Kosovo, Sandzak and Bosnia.

On October 21, 1944, following the liberation of Belgrade, the 1st Proletarian Corps of the People's Liberation Army of Yugoslavia (NOVJ) went into an offensive to capture the Axis's trenches to protect the liberated capital and continue pushing the enemy further to the west.

A total of 12 Yugoslav divisions were backed by the Soviet Red Army and the Bulgarian People's Army. A Slovenian battalion formed in the liberated Belgrade and an Italian brigade also joined the 1st Proletarian Corps's offensive.

The Yugoslav units consisted mostly of under-aged young men drafted en masse in Serbia in the winter of 1944 and 1945.

On the Axis side were units of the Nazi German army and Independent State of Croatia.

The difficult and bloody battles, fought in heavy snow and fierce winds, claimed the lives of at least 13,500 NOVJ soldiers, mostly young men sent to the front from Serbia and...