Fire In Chile Kills At Least 12, Destroys Thousands of Homes 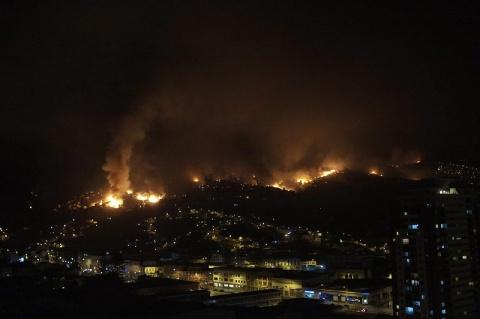 The forest fire got out of control and engulfed several of Valparaiso's hilltop residential areas, killing at least 12 people and destroying thousands of homes. Photo: EPA/BGNES

A forest fire, which got out of control near Chile's city of Valparaiso killed at least 12 people and destroyed thousands of homes over the weekend.

More than 10 000 people were evacuated, including more than 200 female inmates at a prison.

The blaze began Saturday afternoon in a forested ravine next to ramshackle housing on one of Valparaiso's 42 hilltops, and spread quickly as hot ash rained down over wooden houses and narrow streets that lack municipal water systems.

Eventually, neighborhoods on six hilltops were reduced to ashes, including one hill several blocks from Chile's parliament building. Flames later broke out again on at least two of those hills, burning out of control and threatening to consume other neighborhoods.

"It's a tremendous tragedy. This could be the worst fire in the city's history," President Michelle Bachelet said as 20 helicopters and planes dropped water on hotspots.

The fire destroyed at least 2 000 houses by Sunday evening, and the death toll rose to 12, Interior Minister Rodrigo Penailillo said. Authorities warned that the toll could rise once the fires cool enough for them to search for bodies. Patricio Bustos, who directs the national forensics service, said DNA tests would be needed to identify some of the remains. More than 500 people were treated at hospitals, mostly for smoke inhalation.

The fires were contained to the hills, but Bachelet declared the entire city a catastrophe zone, putting Chile's military in charge of maintaining order. While 1 250 firefighters, police and forest rangers battled the blaze, 2 000 Chilean sailors in combat gear patrolled streets to maintain order and prevent looting.

New dinosaur species from Chile had a unique slashing tail

Britain’s government: 'End of coal is in sight'