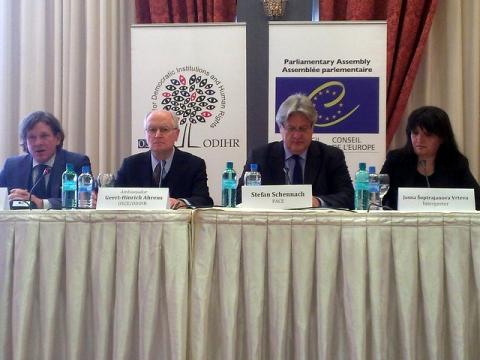 The OSCE/ODIHR monitoring mission to Skopje said on Monday that the polls were well administered and fundamental freedoms were respected with only “small procedural irregularities” and “instances of organized voting”, but the pre-election campaign failed to provide an even field for all political players.

The OSCE’s ambassador to Macedonia, Geert Ahrens, told a press conference that “there was a lack of political analysis and independent reporting and the public broadcaster failed to provide balanced coverage” before Sunday’s polls which saw incumbent President Gjorge Ivanov take a commanding lead ahead of a run-off vote later this month.

Ahrens said that Ivanov, who is running for a second term in office for the main ruling VMRO DPMNE party, had a “significant advantage in resources and predominance in paid advertising” over the other three presidential hopefuls.

In its preliminary report on the conduct of the elections, the OSCE calculated that while Ivanov had 23 hours of paid political advertising during the campaign, his main competitor, Stevo Pendarovski from the opposition Social Democrats, had only three hours.

The OSCE also noted the frequent presence of the prime minister and other government ministers at Ivanov’s presidential rallies.

“The [VMRO DPMNE-led] government’s clear support [for Ivanov] during the election campaign did not fully respect the separation of party and the state,” it said.

The OSCE said that the State Electoral Commission mostly ran the vote smoothly but that in some cases its members voted along party lines.

While the rhetoric at the start of the campaign was mostly moderate, the OSCE noted that as the election day approached, the tone...