UNSC Fails to Agree on Ukraine amid Renewed Clashes 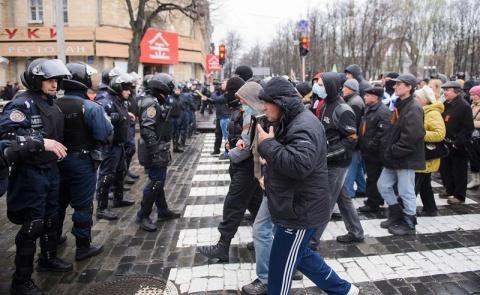 On Sunday the city of Slaviansk was virtually sealed off by pro-Russian groups. Photo by EPA/BGNES

UN Security Council failed to decide on action regarding the unrest in Eastern Ukraine, at an emergency meeting on Sunday.

The latest developments come at a time of violence sparked by rebel groups in the eastern Ukrainian city of Slaviansk.

Four people have died since tensions heightened in Slaviansk over the weekend, Ukraine's UNIAN agency reported.

Life in Slaviansk has come to a standstill as the city is virtually sealed off by pro-Russian groups.

At the emergency UNSC meeting, Russia and the West showed conflicting views on the situation in Ukraine.

US envoy to the United Nations Samantha Power claimed that Russia was behind the unrest in Eastern Ukraine and vowed that Moscow would have to explain the presence of 40 000 troops on its western borders with Ukraine.

Vitaliy Churkin, Russia's ambassador to the organization, repeated Russia's stance that "neo-Nazis" and "anti-Semites" within the ranks of Kiev's "self-proclaimed government," as he was quoted by the BBC.

The UN Security Council has so far gathered 10 times (including the last one) to to discuss Ukraine.

Later on Monday, the EU's Foreign Ministers are to convene in Brussels for an emergency council session over Ukraine.

EU leaders are also due to discuss Russian President Vladimir Putin's warning that a continued crisis in Ukraine might disrupt gas supplies to Europe, as EC President Barroso has said it poses "a threat to Europe's energy security".

The city of Slaviansk, in Donetsk region where "Donetsk People's Republic" was proclaimed last week by pro-Russian separatists, saw unrest on Saturday and Sunday, with rebel groups having overtaken the local administration...