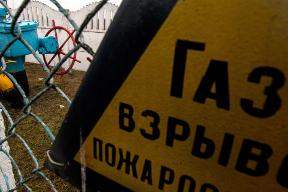 The EU says Russia should not politicise its contractual shipments of gas. [AFP]

The EU says Russia should not politicise its contractual shipments of gas. [AFP]

In a letter to several Southeast European nations, Russia's President Vladimir Putin threatened to shut off gas supplies to Ukraine. The letter, which is intended to increase pressure on Kiev as Kremlin-backed troops stir insurgency in eastern Ukraine, warned of action unless Ukraine starts repaying its debt and unless the EU agrees to joint talks with Russia on the country's economic future. The European Commission responded in a statement and said it expects suppliers to stick to their commitments. The letter was sent to 18 European heads of states that depend on Russian gas transit via Ukraine, including Bulgaria, Croatia, Greece, Romania, Bosnia and Herzegovina (BiH), Macedonia, Moldova, Serbia and Turkey.

EU countries should make more efforts to increase gender equality in the bloc, according to a fresh report from the European Commission. Greece is one of the countries with the lowest female employment rates at about 50 percent compared to an average of 63 percent in the EU as a whole and as high as 75 percent in the Nordic countries, the report noted.

Albania is preparing to import electricity worth up to 90 million euros to compensate for the loss of local output caused by recent drought. The flow of water to Albanian power stations for the past year has declined by 40 percent.

Moldova in 2022: Reformists in Power in Year of Turbulence