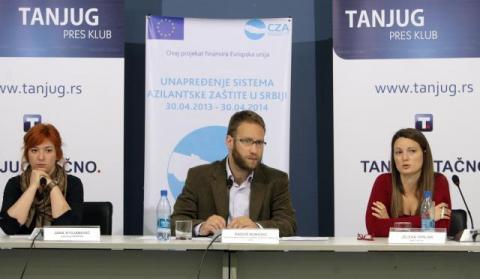 "The fact is that the number of the people who are coming is rising. In the three months since the start of this year, 2,055 people sought asylum in Serbia, which is equivalent to one third of the total number of asylum seekers last year," Đurović told a conference on the crisis affecting the asylum system.

Measures have been taken to boost the accommodation capacities for asylum seekers from 250 to 500, but that is insufficient, he warned.

Regardless of the number of people entering the asylum procedure, Serbia will have accommodation problems sooner or later if they do not exit the procedure, Đurović said.

"Out of the 5,065 applicants last year, only four have been granted asylum. Out of the 2,055 people this year, none were granted protection, which clearly indicates that the system is not functioning," Đurović said.

He cited the example of people who fled Syria last year due to racial and religious persecution and even entered Serbia legally, but were not granted refugee status or provided shelter.

"The asylum act that is under preparation must be passed as soon as possible, preferably in the first half of this...