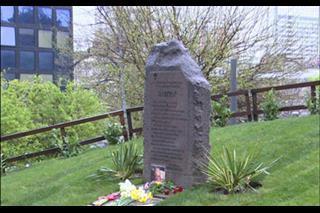 BELGRADE - April 23rd will mark 15 years since NATO's early- morning air strike on the Radio and Television of Serbia (RTS) which killed 16 of its employees.

Marking the anniversary on Wednesday, member of the Belgrade interim council Andrija Mladenovic will lay wreaths at the memorial “Why?" and pay respect to the victims, the city assembly announced.

The Journalists' Association of Serbia (UNS) emphasized in a release that a thorough investigation into this war crime has not been conducted yet.

UNS urged the Serbian Ministry of Defense and the Military Security Agency to make available all the information that may be important for establishing responsibility for this heinous crime to the Commission for investigating murders of journalists.

Human Rights Watch said in 2000 that there was no justification for the bombing of the television station, which the NATO officials claimed to be justified.

A special committee of the Hague Tribunal, which was investigating the case of RTS bombing, did not suggest to the prosecutor to launch criminal proceedings.

Former RTS director Dragoljub Milanovic was sentenced to ten years in prison in Belgrade 2002 for disregarding the order of the then federal government to relocate the personnel and equipment from the RTS buildings. Having served the full sentence, Milanovic was released on September 1, 2012.

The government of Serbia established an international commission last year with an aim to examine the facts obtained in the investigations into the murders of journalists Dada Vujasinovic, Slavko Curuvija and Milan Pantic. The commission's mandate was extended to include the case of RTS media professionals killed in the 1999 bombing.

Brnabic: Maintaining of peace in Kosovo-Metohija our biggest challenge

Danish embassy in Belgrade to buy green energy from EPS

Vucic: I believe in Serbs’ courage, we will not allow expulsions