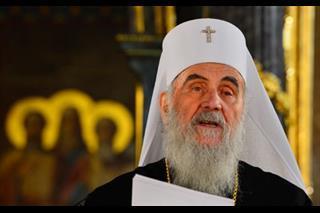 JASENOVAC - Patriarch Irinej of the Serbian Orthodox Church (SPC) held a memorial service in the Saint Ilija Cathedral in Mlaka near Jasenovac on Tuesday to mark April 22 as the day of the breakthrough of the Jasenovac prison camp inmates.

After the liturgy served by Patriarch Irinej, Metropolitan Amfilohije of Montenegro and the Littoral and Bishop Jovan of Lipljan and other clerical dignitaries, a commemoration was held to honour the Jasenovac victims.

The church in Mlaka is built on the land of the sufferers where hundreds of thousands of martyrs were killed just because they were Serbs and Orthodox believers.

According to Irinej, it can hardly be explained what drove the people to commit such a crime.

”This was not done by a member of another religion, this was done by Christians and it is a terrifying fact. I do not want us to condemn or imprecate them, but we must not forget this,” the Serbian patriarch said ad reported by RTRS.

Director of the Secretariat for Religions Dragan Davidovic attended the liturgy as the envoy of the Republika Srpska (RS) President Milorad Dodik. The ceremony was also attended by President of the Serb National Council in Croatia Milorad Pupovac.

In World War II, the village of Mlaka was the centre of the Jasenovac prison camp for women and children from Kozara. Over 30 children died daily from hunger, heat and diseases. A number of execution sites were also located in the area.

Situated some 12 kilometres from Jasenovac, Mlaka was home to around 1,500 people before World War II. The entire village population, including 250 children, was taken to prison camps in spring 1942. Today, the dilapidating village is home to around 40 Serb returnees.