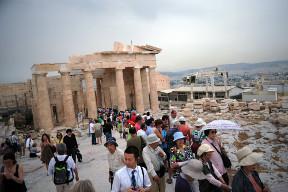 Greece has seen an influx of tourists for the Easter holiday. [AFP]


A wave of tourists visited Greece for the Easter holiday. Also in business news: The European Central Bank launched a Eurosystem co-operation programme with Albania, Kosovo and Macedonia

Greece has seen an influx of tourists for the Easter holiday. [AFP]

Greek tour operators have seen a wave of tourists in the country for the Easter holiday. According to Kathimerini daily, most destinations and hotel resorts in the country were mostly full, with occupancy levels reaching 95 percent in some locations. The most popular destination was Corfu, where hotel occupancy averaged 90 percent.

The construction of Istanbul's Eurasian Tunnel, which will connect the European and Asian parts of the Turkish city, has begun. The project is expected to reduce the travel time between the two parts of the city from 100 minutes to 15 minutes.

Bribery in Albanian businesses often remains unreported, as most enterprises consider bribery a routine act, according to a recent UN survey. About 36 percent of business representatives failed to report bribery cases, the survey revealed. Many bribes are paid to speed up a procedure, finalise a procedure or receive better treatment by public officials.

The European Central Bank launched a Eurosystem co-operation programme with the Bank of Albania, the Central Bank of Kosovo and the National Bank of Macedonia. A total of 500,000 euros have been allocated for the programme, which aims to prepare the three institutions for joining the European System of Central Banks once the western Balkan economies have qualified for EU membership.

The Bank of Cyprus has sold its business in Ukraine, Alfa Group, as well as...

Luring Greek tourists could help save the tourism sector
The sale of the F-35 jets to Greece – A light at the end of the tunnel?