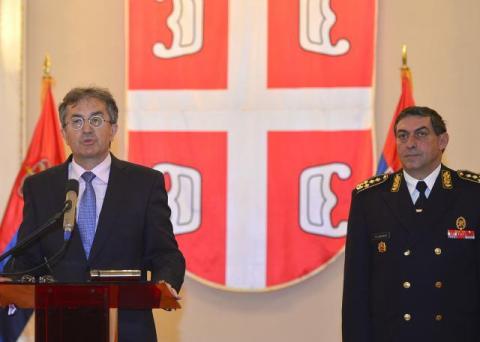 
BELGRADE -- Defense Minister Nebojša Rodić says Serbian soldiers draw from the army's great tradition to form a clear vision of how to achieve their primary mission.

It is "to protect the country and preserve peace," the minister in the caretaker government remarked during a reception organized in Belgrade to mark Serbian Army (VS) Day, April 23.

The army's efforts in natural disaster relief in recent days showed efficiency in peacetime, but also that the military would perform equally well in wartime should that be necessary, Rodić said.

"I hope those trials are a thing of the past and that the Serbia Army and Serbia will never face such challenges again, but also that should such a thing happen, the members of the Serbian Army would go about their tasks in an honourable, responsible and shivalrous fashion, as they have done so far," Rodić stated.

"The strategic direction of the development of the Serbian military is set by our country's political agenda, mostly the foreign policy, based on military neutrality, but also intensive military cooperation with all those dealing in security, from the regional to global level, through different modalities ranging from participation in peace missions to cooperation in military education," he noted.

Besides achievements in domestic affairs, the army have also proven themselves in foreign affairs, since they have improved Serbia's image internationally by taking part in UN and EU peace missions, the minister remarked.