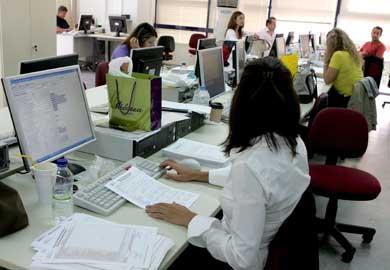 Greece is the only country among the European Union's 28 members states where fewer than half of its workers claim to be dissatisfied with working conditions, a poll published by Eurobarometer on Thursday has found.

Greece has the lowest rate of satisfaction at country level on 16 percent and is the only country where fewer than half of working respondents are satisfied with their current conditions on 38 percent, according to the survey, which was carried out from April 3-5 on 26,571 respondents from different social and demographic groups.

This stands in stark contrast to Denmark, Luxembourg, Finland and The Netherlands, where more than 80 percent of respondents said working conditions in their country are good.

At individual workers' level, Denmark also comes first, with 94 percent of workers being satisfied with their own conditions at work. Austria and Belgium ranked second with 9 in 10 workers expressing satisfaction, followed closely by Finland (89 percent), the UK and Estonia (both 88 percent).

Levels of satisfaction are also lower at country level in Croatia (18 percent), Spain (20 percent), Italy (25 percent), Bulgaria (31 percent), Slovenia, Portugal and Romania (32 percent for each), but also in Slovakia (36 percent) and Poland (38 percent). However, on an individual workers' level, all ranked above the 50 percent mark.

Stress clearly emerged as the most important perceived risk at work (for 53 percent of working respondents), according to the survey, which was published ahead of an April 28 meeting on working conditions in the EU.

In addition, dissatisfaction regarding workload, pace of work and long working days (more than 13 hours) is more widespread than other issues such as lack of interest in the...