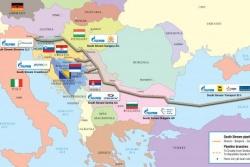 Speaking to journalists after the meeting, Stoynev said South Stream will not be stopped and rejected calls from the European Parliament to freeze the project.

In light of the Ukraine crisis, Parliament took the view that the South Stream pipeline should not be built and that the EU should buy its gas from suppliers other than Russia.

But Stoynev, an economist close to the leader of the Bulgarian Socialist Party Sergei Stanishev, insisted that the construction of South Stream will begin in June as planned. He blamed the centre-right opposition for having misinformed the European Commission about the pipeline, in an attempt to "sabotage" its realisation. The Socialist-led government is an enthusiastic promoter of South Stream.

The Bulgarian minister said that the first onshore station of South Stream would be built 2 kilometres from the Black Sea Coast, and not at 20km, as the opposition had told his Oettinger's services. This made a "huge difference", he said.

Stoynev explained that EU energy liberalisation directives could not apply to an offshore gas pipeline but only to the onshore section. The Bulgarian minister promised that Sofia would inform the Commission of the amendments to a controversial law concerning South Stream before it is passed in second reading, "if any".

On 4 April, the Bulgarian parliament passed on first reading amendments to the country's energy law, according to which South...