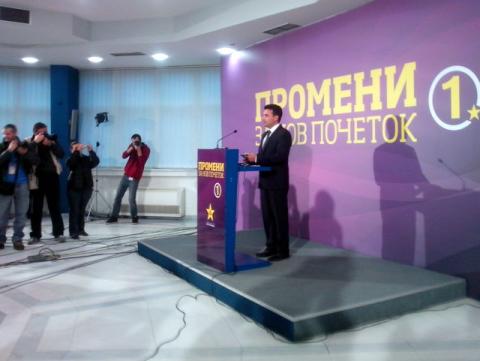 A dispute over the second-round presidential run-off and snap parliamentary elections erupted as polls closed at 7pm local time, with the authorities praising the vote as democratic while the opposition Social Democrats claimed the elections were fraudulent, setting the scene for fresh political discord in the country.

“Macedonian citizens have been duped and the elections have been stolen. The government dared to conduct unfair, non-democratic and uncivilised elections,” Zoran Zaev, leader of the Social Democratic Party, SDSM, told a press conference immediately after polls closed.

He accused the ruling centre-right VMRO DPMNE party, which has held power since 2006,  of “massive and public buying of votes in the presence and with the assistance of the police”, and called for a temporary administration to be established to hold repeat polls.

“This is our definite stance, because no matter if we win or lose, what good is an election victory when the very foundations of democracy have been shattered?” Zaev asked.

But Antonio Milososki from the VMRO DPMNE declared that the vote was fair and accused the SDSM of trying to cover up its defeat by crying foul.

“The people did not allow themselves to be manipulated and they decided to clearly show who they support,” Milososki said.

“This was an attempt to mask their own failure with some story about irregularities,” he said.

The presidential run-off saw VMRO DPMNE candidate Ivanov seeking a second five-year term and entering the second round of voting with an edge over his opponent, Stevo Pendarovski of the SDSM.

In the more important general elections, opinion polls have predicted that the VMRO DPMNE party of Prime Minister Nikola Gruevski could...