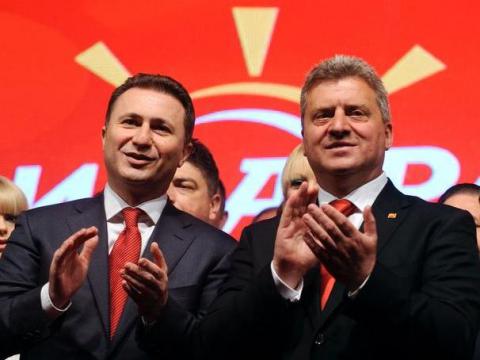 Macedonia's centre-right VMRO DPMNE comfortably won a fourth term in office and Ivanov secured the presidency for the second time, but the opposition Social Democrats, SDSM, claimed that the snap parliamentary polls and second-round presidential elections were fraudulent, setting the scene for fresh political discord in the country.

The State Electoral Commission said that after almost 100 per cent of ballots were counted, VMRO DPMNE won over 480,000 votes and SDSM won 284,000 – the widest margin in favour of Prime Minister Nikola Gruevski’s party since it first came to power in 2006.

But although the ruling party insisted the vote was democratic, the Social Democrats alleged serious violations immediately after polls closed on Sunday evening.

“Macedonian citizens have been duped and the elections have been stolen. The government dared to conduct unfair, non-democratic and uncivilized elections,” SDSM leader Zoran Zaev told a press conference.

Zaev alleged “massive and public buying of votes in the presence and with the assistance of the police”. He said his party wanted a caretaker government to be formed and new presidential and parliamentary elections called.

The ruling party however dismissed reports by local election observers who documented various irregularities as a scenario concocted by the opposition as an ‘alibi’ for their poor results.

“I regret that SDSM has decided to negate the will of the people and work directly against the interests of the country and to benefit those that do not wish this country well,” Gruevski said in his victory speech.

“I hope that they will sleep on it and decide to act in accordance with the interests of this country,” he...