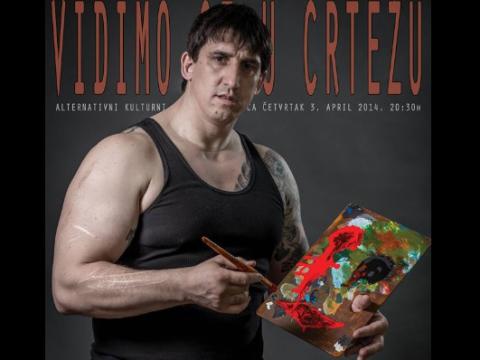 The State Broadcasting Agency said it was investigating whether to sanction television stations Pink, B92, Prva and Happy because they hosted Kristijan Golubovic, a well-known criminal who is now trying to make a reputation as a visual artist, as a guest on their shows.

“The [State Broadcasting Agency] council decided to start a process in which it will be determined if the law on broadcasting or code of conduct for broadcasters was broken,” it said in a statement.

It said that it was not unusual to feature criminals in television shows but broadcasters should pay attention not to “glorify such people and their past”.

Golubovic, who was released from jail in December 2013, is set to begin another 14-year prison sentence for narcotics trading soon.

Kristijan Golubovic, a 44-year-old convicted criminal, became famous after participating in a Serbian documentary film about the Belgrade criminal underworld in the early 1990s, 'See You in the Obituaries'.

He was born in Germany, where he first began his criminal activities. In the late eighties he moved to Belgrade where mafia boss Ljuba Zemunac served as his connection with the underworld. He quickly got to know some of the most notorious figures on the scene, such as Milorad Ulemek 'Legija', who was jailed over the murder of Serbian PM Zoran Djindjic, and Joca Amsterdam, another well-known criminal currently in jail in Belgrade.

After serving time in Germany, Serbia and Greece, Golubovic was caught by police again in Belgrade in 2010 with heroin prepared for sale. He is currently waiting to serve another 14 years in prison.

In the meantime, he held his own exhibition earlier this month backed by Art Brut Serbia...

Alexey Navalny May Be Arrested upon Arrival in Moscow