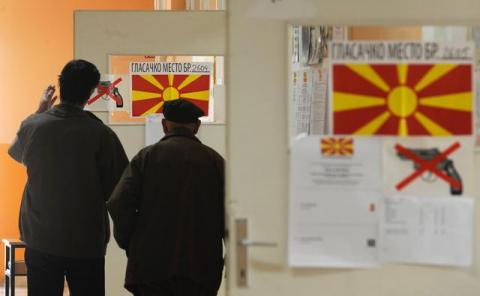 
SKOPJE -- Two parties representing ethnic Serbs in Macedonia will have deputies in the country's new parliament, elected on Sunday.

One of them - the Democratic Party of Serbs in Macedonia - "will almost certainly join the ruling majority," the Beta news agency is reporting.

This Serb party ran within the VMRO-DPMNE coalition of 24 parties, that won 42.1 percent of votes and 61 parliament seats, according to unofficial results.

The other Serb party - the Serb Party in Macedonia - was a part of the coalition gathered around the opposition Social-Democratic Alliance of Macedonia (SDSM), which won 34 seats in parliament.

Based on 99.9 percent of the votes counted, ethnic Albanian parties the Democratic Union for Integrations (DUI) and the Democratic Party of Albanians (DPA) finished third and fourth with 19 and seven seats, respectively.

Incumbent Djorge Ivanov won in the presidential election that was also held on Sunday. He was the candidate of the VMRO-DPMNE, and received 55.2 percent. SDSM's Stevo Pendarovski won 41.1 percent of the votes.

The Central Election Commission said that the turnout in the presidential run-off was 54.3 percent, compared to 64 percent in the parliamentary ballot. It is believed that the DUI party's call to boycott presidential elections was the reason for the discrepancy.

SDSM leader Zoran Zaev accused the authorities of staging "massive buying of votes in the presence and with the assistance of the police," and called on the caretaker government to schedule new elections.

But the election commission said the voting went in accordance with the law, and that it registered only minor...