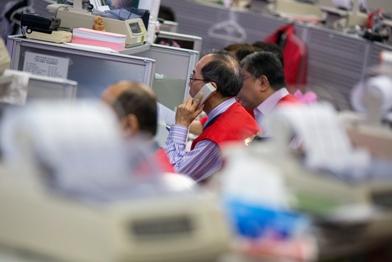 Italian and Spanish bonds fell after European Central Bank President Mario Draghi was said to have told German lawmakers that a quantitative-easing stimulus program isnt imminent and is relatively unlikely for now. The ECB will announce its latest monetary policy decision next week. Italy auctioned 10-year debt at a record-low yield today.

Its all about the inflation so far, said Peter Chatwell, a fixed-income strategist at Credit Agricole SAs corporate and investment banking unit in London. The market sold off once we got that first release, which was stronger than expected. Its low conviction because this week theres so much event risk. The ECB has been very difficult to pin down.

German bunds are set for a monthly gain after Draghi said he was considering unprecedented measures from negative interest rates to QE to avert the risk of deflation and guide the euro area through a gradual economic recovery. Germanys 10-year yield has fallen five basis points since March 31.

The central bank stands ready to embark on QE if needed, Draghi said at a gathering attended by lawmakers from parties that form the nations coalition government, the official told reporters yesterday. The person declined to be...