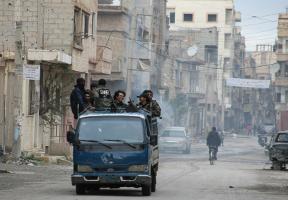 Islamic extremists recruiting fighters from the Balkans are increasingly seeking young women to take up arms, pulling them away from their families to participate in a conflict thousands of kilometres from home.

On April 11th, Interpol announced that two girls from Bosnia and Herzegovina (BiH) were missing, Samra Kesinovic, 16, and Sabina Selimovic, 15.

Recent photos on the girls' Facebook pages show them brandishing Kalashnikov rifles, and in some pictures they are surrounded by armed men. In their latest postings they announced plans to marry so that they can become "holy warriors," as, they wrote, "Death is our goal."

Sabina's father, Sabit, told the media he believes his daughter was kidnapped and taken from Vienna to Turkey.

"We have no information about our daughter, where she is now and how she disappeared in the first place," Sabit Selimovic said.

The girls' families are refugees from BiH who settled in Austria after the conflicts in the 1990s.

The families said the two girls had recently started going to a local mosque run by a radical imam, Ebu Tejma.

Experts said hundreds of fighters have gone from the Balkans to fight in Syria in the past several months, adding that Turkey is a "gate" for fighters from Europe.

"Girls are now cannon fodder for radical Islam, they are tricked and then simply taken there," Dzevad Galijasevic, former director of the Southeast Europe Expert Team for the Fight Against Terrorism and Organised Crime, told SETimes.