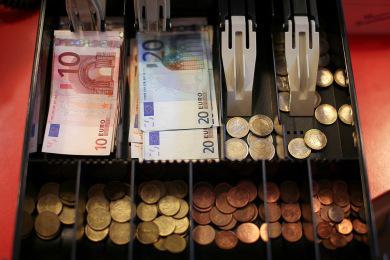 The figures Staikouras announced are part of an updated mid-term budget plan, which the government has submitted for approval to parliament.

"The mid-term plan for 2015-18 marks the country's path towards economic recovery and growth and towards maintaining substantial and sustainable primary budget surpluses,» Staikouras said.

Bailed-out Athens has been topping its budget targets and returned to bond markets earlier this month, in a sign of the progress made in fixing its finances after four years of tough austerity measures that wiped out almost a quarter of its GDP and sent unemployment to record highs of nearly 28 percent.

Greece ended a four-year exile from international bond markets earlier this month with the sale of a five-year bond, and Staikouras said Athens could sell between 3 and 6 billion euros of bonds over the next 12 months.

Greece says it will need no third bailout after the two it already received, worth a total 237 billion euros, to cover its 2010-2014 funding needs. Athens's euro zone lenders are more circumspect and say they are standing by to provide more help if needed.