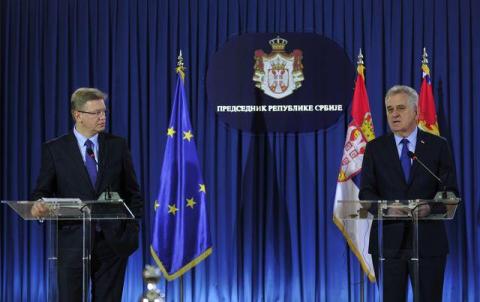 He underscored that there are three key priorities on that path, including the country's economic recovery and reforms, introduction of rule of law and normalisation of relations with Priština.

”A few days ago, we have celebrated the tenth anniversary of the biggest EU enlargement. And back in 2004, the EU integration of Serbia seemed like a very distant future. Nowadays, it is a very clear prospect, and I'm fully confident that Serbia has the ability to make this prospect a reality rather soon,” Fule said.

Nikolić underscored that Fule is a man who has in the course of his mandate changed the image of Serbia, clearly demonstrating his commitment and support to Serbia in its ambition of becoming a member of the EU and leading the others along the path.

”I do not expect the EU to stop the progress Serbia made in European integration in any way,” Nikolić said.

“This is a crucial period of the EU-Serbia relations and also an important chapter in the modern history of Serbia - a new chapter being written, a very European chapter. Serbia has made an impressive progress on its path towards the EU integration. It is very encouraging to see in the last election the Serbian citizens have supported parties with clear and also ambitious commitment to the EU integration,” the EU commissioner said.

The EU is fully committed to support to reforms in Serbia and it will step up its technical and expert assistance to this end, he underscored.

The Serbian president said that Fule is a man who performed...