Udovicki: Institutions posing a problem, much work ahead 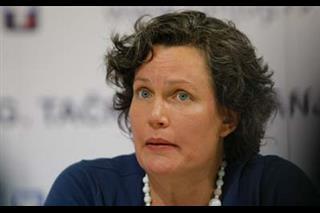 BELGRADE - For a long time now, Serbia has had a problem with institutional legacy and there is much work to do to coordinate all ministries and make them aware of their tasks, Serbia's Deputy Prime Minister Kori Udovicki, who is also the minister of state administration and local self-government, said on Monday.

For Serbia to be able to plan its future there must be coordination, Udovicki said at a public debate on planning Serbia's future.

"This public debate was prepared even before the formation of the Serbian government since we are aware that Serbia is not planning its future well enough, or not at all," Udovicki said.

She said that planning is also what the EU expects from Serbia.

The timeframes regarding the announced fiscal consolidation must be complied with, while other methods and timeframes may be discussed, Udovicki said.

Prime Minister Aleksandar Vucic has delivered a clear and detailed presentation of his programme to make the tasks clear to everyone and highlight the urgent problems, but there is room for discussion, because "it would not be good if there was no room for further discussions," she said.

EC to recommend opening of two clusters with Serbia