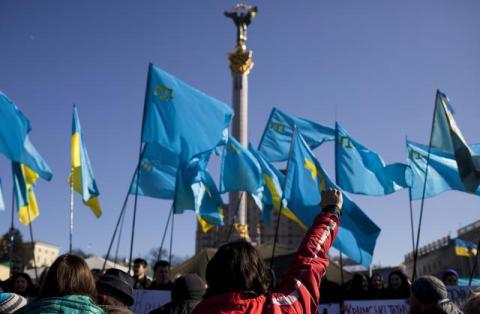 
ki -- Ukraine's government is ready to talk to political parties and regional officials in the east on resolving the crisis, but not to "terrorists", Kiev announced.

The authorities there are referring to pro-Russian activists who favor Ukraine's federalization as "terrorists and bandits supported by Russia with the goal of destabilizing Ukraine."

Reuters reported that Russia "denies playing any role in the uprising in Ukraine's east, saying pro-Russian speakers are simply defending their rights against possible attacks by the pro-Western government."

The news agency added that Russian President Vladimir Putin called on Wednesday "for talks between Ukraine's new pro-Western leaders and separatists in the east, a move which Kiev said suggested his u-turn was evidence that international pressure on Moscow was working."

Reuters said that Putin also called for a postponement of "a referendum on independence" scheduled for May 11 "and announced he was pulling Russian troops back from the Ukrainian border."

The ministry of foreign affairs in Kiev said it was "waiting for evidence that the troops had moved from the border."