Vartholomaios to meet Merkel, Gauck during official visit to Germany 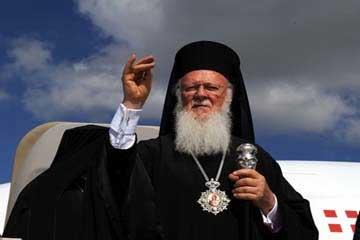 Ecumenical Patriarch Vartholomaios, the spiritual leader of Orthodox Christians, arrived in Germany for a nine-day official visit on Saturday.

The Istanbul-based spiritual head was expected to meet with German Chancellor Angela Merkel and German President Joachim Gauck among other high-ranking German officials, as well as with leaders of other Christian churches.

The visit is being closely watched by Orthodox, Catholic and Protestant communities.

Germanys Greek Orthodox Church has more than 450,000 followers and is currently celebrating its 50th anniversary.

In an interview with AP last week, Vartholomaios spoke of his upcoming meeting with Pope Francis, scheduled to take place in Jerusalem on May 25-26, an encounter expected to assist the Greek Orthodox and Catholic churches in putting an end to a divide that began in 1054.

The two churches remain split on a number of issues, including matters relating to marriage for the clergy.