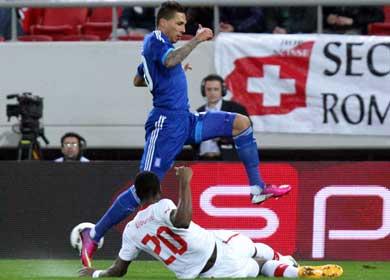 Greece will create a little bit of history in Brazil in June and reach the World Cup knockout stages for the first time coach Fernando Santos has confidently predicted.

The 59-year-old is stepping down after the finals but he is so confident his solid but no frills side will get through Group C - against Colombia, Ivory Coast and Japan - that he says his contract will have to be extended as the knockout phase takes place after his present one finishes on June 30.

Santos, who guided Greece to the 2012 European Championships quarterfinals, is supremely confident in his players.

"They will give their all in the World Cup so that our parting will be the best possible. That's my intention as well,» he told UEFA.com in March.

"My only aim is to see Greece qualify for the World Cup knockout phase and I will do everything in my power to achieve that and make Greek fans happy."

However, immediately after he made the prediction Greece lost 2-0 to fellow World Cup qualifiers South Korea in a friendly.

It was a rare reverse for Greece under Santos, whose overall record reads better than Otto Rehhagel, the veteran German who coached it to the 2004 European Championship title, where it beat host Portugal - with the talents of Luis Figo and a teenage Cristiano Ronaldo - in the final.

Aside from guiding Greece to a national record 17 straight games without a loss, beginning with his first game in charge in August 2010 and ended by Romania in November 2011, he has seen his team win 24 and lose just five times in 42 matches.

However, while those statistics are impressive Santos faces problems as his goalshy strike force was the reason Greece failed to top its qualifying group, finishing level on points with Bosnia but with...