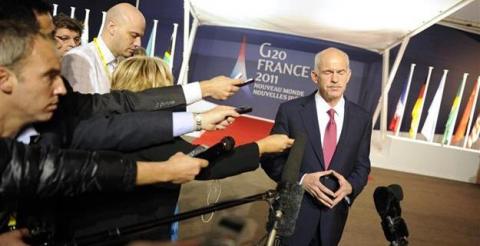 Recent revelations by the Financial Times of the behind-the-scenes machinations at Cannes in November 2011 that led to the downfall of Greeces then-Prime Minister George Papandreou  a negligible loss of course  and where the leaders of the European Union lost complete control of themselves leave a bitter taste.

German Chancellor Angela Merkel is cast with tears in her eyes, adamantly refusing to commit political suicide by agreeing to stabilize the European system. As a minister in the government of Helmut Kohl, Merkel had previosuly publicly broken down in tears, but this did not prevent her from assuming the leadership of the Social Democrats and later the Chancellery. Merkel knows when histrionics pay off: After the Cannes crisis she emerged as an undeniable leading figure of the European Union.

Meanwhile, the ballistic  as the FT describes them  explosions of then-French President Nicolas Sarkozy against Papandreou, who intended to hold a referendum over whether Greece should agree to the first bailout deal, were met with shock and in some cases even pity for the Greek leader. It painted a scene of an elected prime ministers complete devastation.

All of this, of course, is not to create the impression that Greece should leave the European system. Such heroic maneuvers would lead to untold destruction and misery. This is something that opposition SYRIZA leader Alexis Tsipras should bear in mind now that he has assumed the leadership of a revolutionary movement against Merkel. Willful blindness is no excuse, but nor should we overlook the fact that even when the leader of a great power reacts in such a ridiculous way, she is still representing a country with mighty force that...