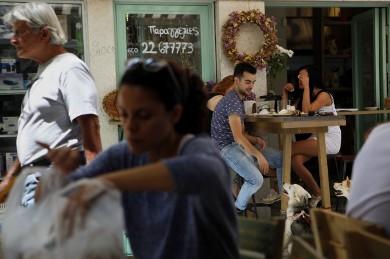 International lenders anticipate a shallower recession in Cyprus this year as private consumption continued to drive the economy, authorities said on Saturday, holding out the possibility of an earlier than envisaged return to international markets.

Lenders concluded their fourth mission to the island and said an economic adjustment programme was on track, Finance Minister Haris Georgiades told reporters.

"It was noted that progress was achieved in all sectors of the economy,» Georgiades said.

Lenders, known as the troika, had lowered their expectations on the depth of recession to 4.2 percent, from a February projection of 4.8 percent, Georgiades and European Union officials said.

But future recovery was likely to be more subdued, given the high levels of unemployment, a liquidity crunch from high non- performing loans in the banking sector and indebtedness which could dampen consumption, the troika said in a joint statement.

Cyprus's economy contracted by 5.4 percent in 2013, more than 2 percentage points better than initial expectations. A return to growth of about 0.4 percent was anticipated in 2015, the IMF and the EU said.

"Consumption is holding up better than we expected,» a senior European Commission source said, adding it was also due to the carry-over effect from 2013.

The source said the possibility of Cyprus returning to international markets earlier than its end-2015 game plan could not be discounted, given its performance so far.

Cyprus teetered on the verge of financial collapse in March 2013 after its banking system imploded from risky lending, exacerbating a cash squeeze on a state which has been shut out of financial markets for three years.

Turkish FM Cavusoglu direct threat to Greece and Cyprus: “They will pay a heavy price for abetting terrorists”