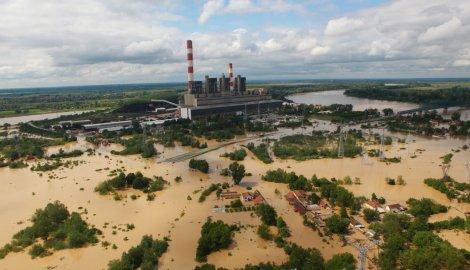 
The damage caused by flooding is six times larger than the limits of the EU funds from which Serbia is expecting to get so much needed help.

According to the first assessments, the damage is at least a billion of Euros, the Blic learns at the Serbia Government.

The message from Brussels is that we shall get the money only if we prove that the minimal damage is 174.6 millions. Namely, financial help is possible if the damage is at least 0.64 percent of the GDP. The condition is that the Serbia Government forwards to the European Commission a detailed report about consequences of the flooding until the end of July.

The EU practice is that it gives from the fund for extraordinary situation five to ten percents of the total damage suffered by a country. The Serbian Government is expecting that about a hundred of millions of Euros arrive from Brussels.
In order to secure the most favorable amount of money for Serbia, the Foreign Minister Ivica Dacic and the Minister without Portfolio in charge of European Integration Jadranka Joksimovic are travelling to Brussels today. Kristalina Georgieva, the EU Commissioner for Extraordinary Situations arrived to Belgrade yesterday evening. The EBRD delegation is expected to arrive today and on Thursday a money-raising conference will be held at the Serbia Goverment Building which is expected to gather representatives of not only the EU, but of China, India, Azerbaijan, Russia...

Kristalina Georgieva said first that Serbia could expect from the EU Solidarity Fund a billion of Euros and then that it was a total amount of that fund and that Serbia would be given a portion...