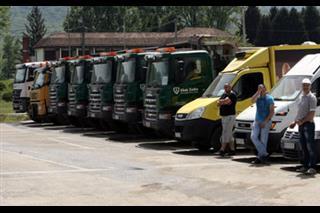 LJUBOVIJA - Serbian President Tomislav Nikolic delivered humanitarian aid to endangered residents of the municipality of Ljubovija in western Serbia, where the situation is very bad after the recent heavy flooding, on Friday.

The aid consists in a fleet of ten trucks with machinery for repairing damage caused by floods, 15 trucks to take away garbage, waste and debris and two trucks of food, which was collected in a campaign led by President Nikolic and the Dragica Nikolic Foundation, headed by his wife.

The food is intended for the villagers of Podgaj and it will be delivered to them by volunteers of the Serbian Red Cross. The village could not be reached today as the bridges leading to it have been washed away and roads are still impassable.

Nikolic attended a meeting of the local emergency headquarters where he learnt about the scale of damages caused by the flooding of the Drina River in the Ljubovija region, bordered by Bosnia-Herzegovina.

Municipal President Miroslav Micic stated that heavy rain caused the flooding of the local river, wild waters triggered landslides, and the town was completely cut off from the world for two days.

Because of that, Ljubovija could not receive pumps to pump water out of flooded houses and so basements and ground floors of some 300 houses are still under water.

Six houses were destroyed, 24 are damaged and 110 are still in danger, and we also have three washed away and four damaged bridges, Micic said.

After that, he and a number of local officials visited the Veliki Majdan mine, which employs 400 people...