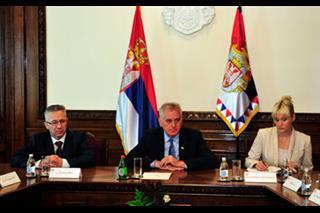 BELGRADE - Serbian President Tomislav Nikolic has urged the European Bank for Reconstruction and Development (EBRD) to take part in a donor conference aimed at providing assistance to Serbia and other flood-hit countries in the region - to be held under the auspices of France - noting that long-term development plans also need to be considered.

The quick assistance that Serbia needs at this difficult moment is no reason for us to stop thinking about long-term development plans for our country, said Nikolic, who on Friday met with an EBRD delegation headed by the bank's President Suma Chakrabarti, the presidential press office said in a statement.

Nikolic said that Serbia is grateful for all the support offered by friends, adding that, once the country overcomes the trouble that has befallen its citizens, there will be opportunities for discussions about major Serbian companies with quality projects that are interested in cooperating with the EBRD.

Chakrabarti told Nikolic that he will in the next few days inform the relevant EBRD body of possibilities for quicker assistance to Serbia and all other regional countries that have been hit by the floods.

He said that the EBRD deeply sympathises with all people affected by the floods and that, for that reason, it will take part in the donor conference, to be held under the auspices of France.

Chakrabarti and Nikolic agreed that, in addition to immediate assistance to Serbia, long-term development projects must also be considered to enable the country to overcome the present crisis as soon as possible.