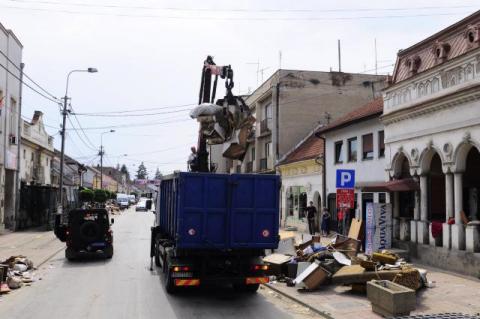 BELGRADE -- Health Minister Zlatibor Lončar stressed on Monday after a government session that the cleanup and recovery phase after the floods is "yet ahead."

Lončar advised against "dropping the guard" and said his ministry, along with that in charge of agriculture, was "on full alert" to act together in this phase in order to suppress any possible outbreak of diseases, and to ensure that evacuees can safely return to their homes.

Lončar told B92 TV that personnel was constantly in the field, as all conditions are in place for "infections to develop," adding that "everything needs to be done to prevent that."

"So far we have everything under control, but we don't know what will happen by the end. Not everything can be predicted, since some things can be kept under control, while others cannot, just as was the case with the floods," he said.

The minister noted that the World Health Organization (WHO) several days ago raised the epidemic alert to level two, and that this applied to "Serbia, the Serb Republic (in Bosnia), and Croatia."

Asked whether there was a sufficient supply of protective equipment, Lončar said that Serbia had a quantity in reserves, and received the rest from donations - the last such shipment arriving from Croatia.

Also on Monday, State Secretary for Health Berislav Vekić said that the health situation was stable in the flooded areas of Serbia where people are beginning to return to their homes.

He stressed that shelters for those who had been evacuated were under constant monitoring.

"In Belgrade alone, we have 45 shelters that are under constant supervision of health care...

A new case of suspected coronavirus in Europe