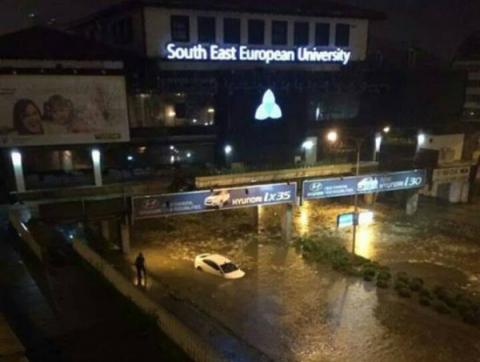 No one was hurt in the 30-minute dramatic storm that overwhelmed Skopje's water collection system and took residents by surprise, police reported late in the evening.

Unlike in neighbouring Serbia and Bosnia, where rivers recently overflowed causing massive floods, the storm in Skopje was short-lived and the River Vardar did not burst its banks.

The storm had its most dramatic effects at several important boulevard junctions and low-lying sections of road, where cars seeking refuge from the heavy hail got trapped by gushing water.

Passengers from dozens of cars across the city had to be rescued as their vehicles were left literally floating in water.

Many households sought help from the authorities as their basements and ground floors were flooded.

The underground floors of the Macedonian Radio and Television building, the National Theatre and the iconic City Trade Centre, GTC, were also under water, authorities reported.

In the suburb of Novo Lisice, a lightning strike that caused a gas pipe to leak triggered alarm among residents. Police evacuated the area as teams worked to fix the problem.

The water accumulated at a construction site in the same district caused a landslide, pulling several parked vehicles into a large water-filled hole.

“All of our teams from the emergency services as well as from the public enterprises are on the ground and I believe we will be able to cope with the situation very soon,” Skopje mayor Koce Trajanovski told reporters around midnight.

Transport Minister Mile Janakieski said that the government was closely monitoring the situation and was ready to help if necessary.

Flooding on the boulevards caused heavy traffic congestion at the entrances...