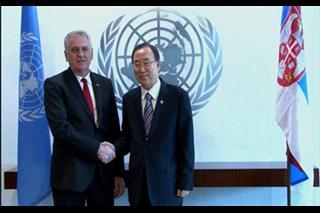 Nikolic met with Ban in New York ahead of his address to the UN Security Council in the meeting dedicated to Kosovo-Metohija (KiM).

The UN Secretary-General expressed his sorrow over the disastrous floods that hit Serbia, Bosnia-Herzegovina and Croatia, adding that he is convinced that the three countries will overcome the problems they are now facing, the Serbian president's press service said.

Ban expressed thanks for the involvement of Serbian troops in peacekeeping missions around the world, stressing that the policy of reconciliation and cooperation in the region, promoted by the Serbian president, is very encouraging.

Nikolic thanked Ban for his words of condolence, and noted that the massive flooding that hit Serbia brought disaster to the country but also showed the strong sense of responsibility of its government and a tremendous solidarity and determination of its people.
"Unfortunately, the loss of human lives is irreparable and we deeply sympathize with the families. Now we must try to rebuild," said Nikolic, and asked the UN Secretary-General to support Serbia in this effort.

Referring to KiM, Nikolic said that Pristina has done much to provoke Serbs into not participating in the parliamentary election scheduled for June 8.