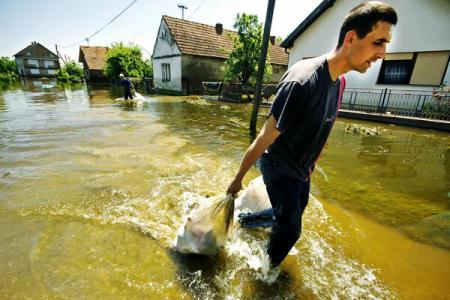 Serb minority Deputy Slavomir Gvozdenovic, in the Deputies' Chamber plenum on Tuesday, made a humanitarian call for helping the flood victims of Serbia and the Republic of Srpska.

'Serbia and the Republic of Srpska, an entity of Bosnia and Herzegovina, were hit by catastrophic floods, of an intensity that has not been seen over the past 200 years. The apocalyptic-like flood affected entire cities, tens of thousands of houses and apartments, over 50,000 inhabitants were evacuated from the affected areas, there are even tens of dead people, after the first international evaluations, the damage exceeds one billion euros. The Union of Serbs in Romania and the Serb Orthodox Church, in collaboration with the Embassy of the Republic of Serbia in Bucharest, make an appeal to the Romanian friends and to all the good-faith people: please help Serbia, help the Republic of Srpska! Aids have come and keep coming from all over the world, from the EU, from all continents, they are also being sent from Romania,' the Serb minority deputy said.

He added that at the suggestion and plea of the Government of Serbia he told all Romanian friends that money was needed as a priority and, for this, the Union of Serbs in Romania put at the disposal of all Senators and Deputies a banking account in lei and a humanitarian SMS line for aiding the victims. AGERPRES