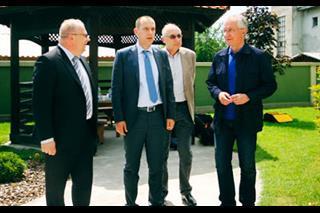 MOROVIC - Health ministers of Serbia, Croatia and Republika Srpska (RS), the Serb entity in Bosnia-Herzegovina (BiH), reached an agreement Tuesday on a common strategy for the fight against infectious diseases threatening the countries in the region after the flooding.

The three ministers' meeting held in the village of Morovic, Srem, southeastern part of the Serbian province of Vojvodina, was also attended by Dragan Ilic, director of the Serbian Public Health Institute.

The ministers agreed to present their common strategy for combating infectious diseases before the EU and the World Health Organization (WHO), and to make sure that all relevant institutions act in unison so as not to come out with different views and demands.

Serbian Minister of Health Zlatibor Loncar emphasized that effective communication has been established between health ministry officials over the past several days, and that the ministers have convened in order to make concrete arrangements based on earlier agreements.

"We expect that conditions will be met on Friday for insecticide spraying of mosquitoes from the air in all flood affected areas in the region, which will be conducted under the auspices of EU and WHO,” Loncar told reporters after the meeting.

Croatia's Health Minister Rajko Ostojic said that ministry officials of countries in the region hit by the floods concluded that insecticide spraying from the air is necessary as the affected area covers more than 100,000 hectares.

Dragan Bogdanovic, Minister of Health of Republika Srpska, said that the situation is critical in the territory of Samac, while the city of Doboj is completely devastated, adding, however, that no infectious diseases have so far been reported...