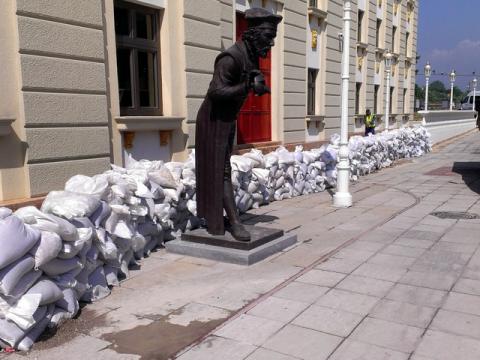 After Sunday’s short torrential rain and hailstones the size of marbles, which took residents by surprise, the authorities on Tuesday restored matters to normal.

All major road junctions and low-lying sections of road, where cars seeking refuge from the hail had become trapped by gushing water, have been cleared of debris and blown-down trees removed from streets and pedestrian areas.

Emergency teams said they responded to over 70 calls for help from residents and from shop owners who suffered damage from the gushing water.

“We are forming commissions to assess the damage on the ground,” said Nedelco Krstevski, the spokesperson for the City of Skopje.

During Sunday’s storm, 37 litres of rain fell in just a half-an-hour. Winds were blowing at speeds reaching 70 kilometres an hour.

According to the city authorities, the hail that clogged drainage systems was the main reason for the high level of water on the streets, which at some junctions reached two metres deep, lifting up stranded vehicles.

Unlike in neighbouring Serbia and Bosnia, where rivers recently overflowed and caused massive floods, the storm in Skopje was brief and the Vardar did not burst its banks.

Meteorologists warn Skopje residents not to relax just yet, however, as more storms are forecast for some days to come.

In preparation for this, several buildings whose basements flooded on Sunday have been secured against more rain with sand bags. These include the National Theatre, Macedonian Radio and Television, the City Shopping Mall, GTC, as well as the Government building.

The city of Skopje has formed an emergency team that is on 24/7 standby.

While Skopje remained on high alert for more torrential rains...