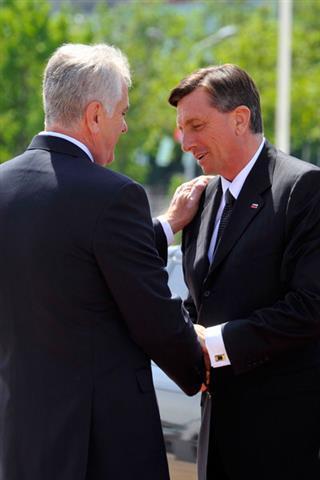 Nikolic welcomed his Slovenian counterpart in front of the Palace of Serbia, where the two presidents saluted the honorary guard of the Serbian Armed Forces that was part of the ceremonial welcome.

The talks between the presidents will be followed by a meeting between the state delegations of Serbia and Slovenia, after which Presidents Nikolic and Pahor will sign a political declaration.

The Slovenian president will also lay a wreath at the Monument to the Unknown Hero on Mt. Avala.

Pahor will arrive together with Slovenia's Minister of Finance Uros Cufer, Defence Minister Roman Jakic and a delegation of around 100 business officials.

The second day of the visit will be dedicated to economic cooperation. There will be a roundtable discussion and meetings at the Serbian Chamber of Commerce, which will be organised by the two countries' chambers of commerce and the Slovenian Business Club.

Pahor will also visit the flooded areas where Slovenian soldiers and policemen took part in rescue actions, and are now participating in the clean-up of the flood-hit areas.