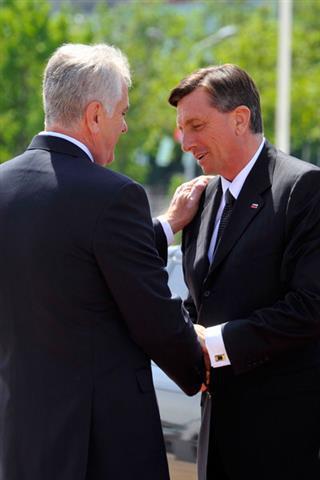 BELGRADE - Serbian and Slovenian presidents Tomislav Nikolic and Borut Pahor agreed on Thursday that bilateral relations are excellent and that no open issues exist between the two countries.

"We are opening a new chapter in which we want political relations to remain exemplary and economic ties to gain new momentum," Pahor said at a joint press conference after a meeting with Nikolic.

He said that his visit to Belgrade represents a turning point, being the first bilateral visit to Serbia by a Slovenian president since the democratic changes and Slovenia's independence in 1991.

Also discussed was what separated the two countries in the past, but no open issues exist between them, Nikolic said.

"We, of course, do not agree with Slovenia regarding its recognition of Kosovo and Metohija, while Slovenia might disagree with us on the issue of sanctions against the Russian Federation, but that cannot affect our relations," Nikolic said.

There are no open issues that could potentially hamper the development of bilateral relations, Pahor confirmed, adding that Slovenia is a major ally of Serbia on its European path.

Slovenia has pledged economic, technical and consulting assistance to Serbia regarding its EU accession, Nikolic said.

"Slovenia is a promoter of Serbia's EU membership," Nikolic said.

Nikolic thanked Slovenia for what he said was the quickest possible reaction in providing assistance during the recent floods in Serbia.

"Pahor made a phone call to offer unreserved support in rescuing people, and we accepted that assistance with our hearts wide open," the Serbian president said, adding that "a friend in need is a friend indeed."