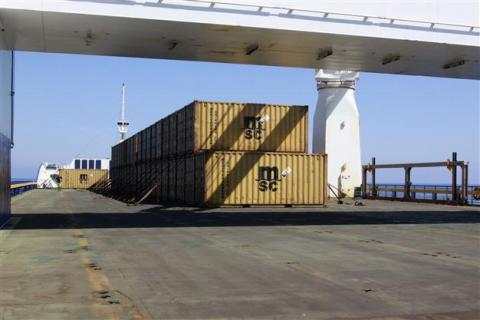 Containers on the deck of Ark Futura, a Danish-chartered cargo vessel, carry precursors to sarin gas, part of the effort to extract chemical weapon stockpiles from Syria, in the Eastern Mediterranean Sea. REUTERS Photo

The destruction of Syria's chemical weapons arsenal will not be completed before a June 30 deadline agreed after Washington threatened air strikes last year, U.N. chief Ban Ki-moon has said.

An April 27 deadline for Syria to hand over its chemical weapons to international monitors also expired with Damascus holding around eight percent of its declared material.

Under a U.N.-backed and U.S.-Russia brokered deal agreed last year after the United States threatened air strikes against Syrian government targets, the weapons were to be destroyed by June 30.

But a letter from Ban to the Security Council dated May 23 and obtained by AFP confirmed what had looked increasingly unlikely - that the June deadline would not be met either.

"It is now evident that some activities related to the elimination of the chemical weapons programme of the Syrian Arab Republic will continue beyond 30 June," he wrote.

Ban said work would continue "for a finite period" after June 30 during which most remaining activities for the elimination of the chemical weapons programme should be completed.

"This will also give sufficient time to put in place appropriate successor arrangements for OPCW to continue any residual in-country verification activities beyond this period," Ban said.

He also expressed concern about alleged ongoing use of chlorine gas and urged the Syrian government and opposition groups to cooperate fully with a fact-finding mission.

The mission was dispatched after France and the United States alleged government forces may have unleashed industrial chemicals on a rebel-held village earlier this month.

Syria did not have to declare its stockpile of chlorine - a weak toxic...