Indian teen girls gang-raped and hanged from a tree: police 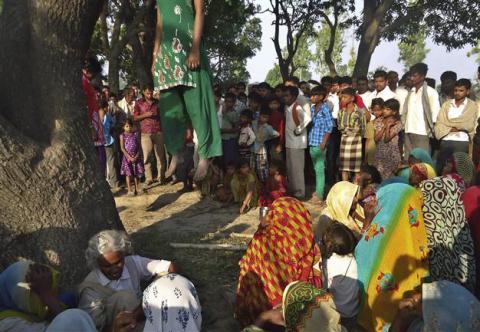 In this Wednesday, May 28, 2014 photograph, Indian villagers gather around the bodies of two teenage sisters hanging from a tree in Katra village in Uttar Pradesh state, India. AP Photo

Indian police have arrested one man and are looking for four other suspects after two teenage girls were gang-raped and then hanged from a tree in a village in the northern state of Uttar Pradesh, police said on Thursday.

The two cousins, who were from a low-caste Dalit community and aged 14 and 15, went missing from their village home in Uttar Pradesh's Budaun district when they went out to go to the toilet on Tuesday evening.

The following morning, villagers found the bodies of the two teenagers hanging from a mango tree in a nearby orchard.

"We have registered a case under various sections, including that of rape, and one of the accused has been taken into custody. There were five people involved, one has been arrested and we are looking for the others," Budaun's Superintendent of Police Man Singh Chouhan told reporters.

Chouhan said a post-mortem confirmed the two minors were raped and died from the hanging. DNA samples have been also been taken to help identity the perpetrators, he added.

The victim's families say the girls were gang-raped and then hanged by five men from the village. They allege that local police were shielding the attackers as they refused to take action when the girls were first reported missing.

It was only after angry villagers found the hanging corpses and took the bodies to a nearby highway and blocked it in protest, say the families, that police registered a case of rape and murder.

A case of conspiracy has also been registered against two constables, said Chouhan, adding that they had also been suspended.

Sex crimes against young girls and women are widespread in India...