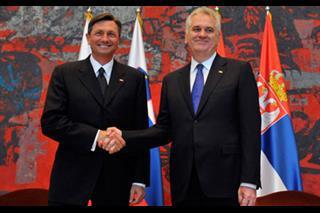 BELGRADE - President of Serbia Tomislav Nikolic and his Slovenian colleague Borut Pahor visited on Friday the Economic Institute where the office of Slovenian statesman Antun Korosec was once located.

The Economic Insitute has been situated in that building since 1926 and was preceded by the Foreign Ministry. Korosec moved into one of the offices there in 1932 and the interior of the office has been preserved.

Korosec was a statesman, theologian and leader of the Slovenian People's Party.