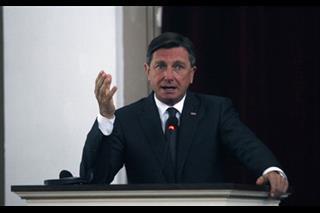 BELGRADE - Slovenian President Borut Pahor stated on Friday that the results of the elections for the European Parliament might slow down the EU enlargement process, adding that Serbia will have Slovenia's full support in the accession talks with Brussels.

Addressing students at the Belgrade University Rectorate on the topic of the future of the EU and its further enlargement, Pahor said that it is in the absolute interest of the EU to continue the enlargement process, adding that Serbia, which already has a candidate status, stands excellent chances.

Slovenia is a friendly country which understands the region, particularly Serbia as the regional power, and the importance of Serbia's EU accession, and we will certainly be allies on the pathway, said Pahor, who is paying a two-day visit to Serbia.

Noting that right wing and anti-European parties won by landslide in the European elections in many countries last weekend, Pahor said that this big step backwards will reflect on the EU enlargement dynamics.

Asked about Serbia's EU accession criteria, the Slovenian president said that the criteria are defined in 35 negotiating chapters, adding that he, as a friend of Serbia, would like to state openly that the success of the talks depends on Belgrade's relations with Pristina and regional countries, Bosnia-Herzegovina in particular.

Pahor said that lately the Serbian government has been conducting a very good policy in this area, despite occasional problems primarily in relations with Pristina.

The EU has the right to request from Serbia to normalize relations with Pristina, but it would make a great mistake to put this condition before everything else.

He expressed hope that there will...