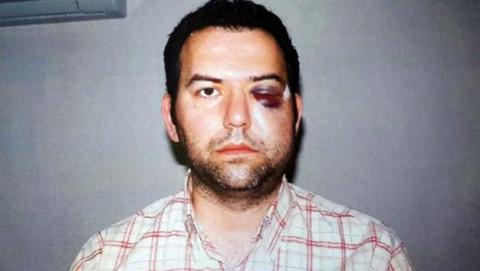 Mustafa NamlÄ± sustained permanent damage to his left-eye after being hit by a police tear gas canister during Gezi protests last year in Ankara.

Prosecutors have ordered that a police officer who injured a protester during last yearâs Gezi demonstrations in Ankara be searched for until 2028, the time limit of the statute of limitations for the crime.

Mustafa NamlÄ± sustained permanent damage to his left-eye after being hit by a police tear gas canister during protests on June 1, 2013, in Ankaraâs KÄ±zÄ±lay Square.

Upon NamlÄ±âs testimony, the prosecution had requested images filmed in the surroundings of KÄ±zÄ±lay Square from the police department, but all the footage sent was incomplete.

The prosecutor in charge of the case, Mehmet BaÅer, ordered then a 14-year search.

Prosecutors also stated that the police department issued an order to ârigorously searchâ for the officer responsible for firing the tear gas canister, though lawyers representing NamlÄ± criticized the prosecution for failing to meticulously probe police violence.

âThese investigations usually drag on, as police department officials usually state that the camera were not working at the exact time when the victimsâ injuries occur,â lawyer Saliha Åahin said, adding that the prosecutor has closed the file until the suspect is found.

In many investigations, including those into the killing of Gezi protesters Ali Ä°smail Korkmaz and Berkin Elvan, camera footage was initially said to be lost or non-existent. They then surfaced as the investigations...