Zannier: Serbia to preside in significant year for OSCE 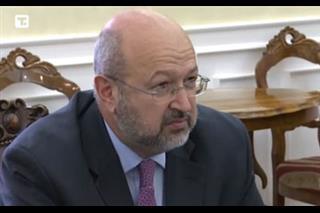 BELGRADE - Organisation for Security and Co-operation in Europe (OSCE) Secretary-General Lamberto Zannier said Saturday that 2015, the year of Serbia's presidency over the organisation, will be significant as the 40th anniversary of the signing of the Helsinki Final Act.

Judging by the current situation, Ukraine is the main topic to be addressed by the OSCE in the coming period, Zannier told Tanjug, noting, however, that it is unknown how the situation in that country will develop by the time Serbia takes over the OSCE presidency.

We hope that the political process will develop well and that we will be working on further stabilisation, he said.

He said that on Saturday he had an opportunity to speak to Serbian Foreign Minister Ivica Dacic and analyse the crucial steps planned for next year.

The OSCE Secretariat is already cooperating with Serbian colleagues, and the preparations for the Serbian presidency are good, Zannier said.

On January 1, 2015, Serbia will take over the one-year OSCE presidency from Switzerland.

Switzerland and Serbia have agreed to hold successive presidencies and worked out a joint plan for presiding over the organisation and naming the personal envoys of the OSCE chairperson-in-office, which will give OSCE continuity in terms of presidency.

It was the first time that any two countries made such an agreement - in the past, the lists of priorities and personal envoys changed after each presidency.

Trabzonspor to appeal at sports court over UEFA ban