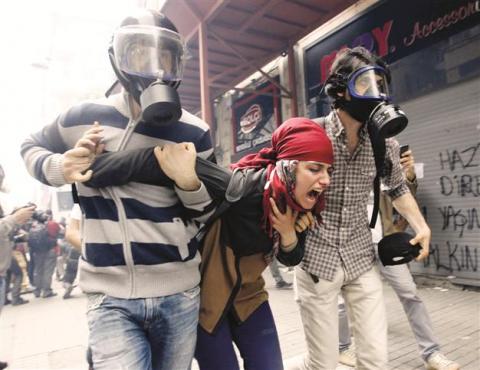 The 153 people who were detained in Istanbul and Ankara during demonstrations to mark the anniversary of the Gezi Park protests were released on June 2.

The protesters, who were detained and taken to the Vatan Police Department in Istanbul on May 31, were taken to ÃaÄlayan Courthouse to testify.

Istanbul prosecutors released 29 people after initial interrogations and sent the remaining six to the court by requesting their arrest. Declining this request, the court released the six conditionally.

Meanwhile, all 118 people detained in Ankara were released after giving their testimonies to the police department in the capital.

The Gezi protests rocked the country last summer, after an initial sit-in protest against a plan to bulldoze a park in central Istanbul turned into nationwide anti-government rallies following heavy-handed police crackdowns.

Some 25,000 police officers and 50 water cannon trucks (TOMAs) had blocked access to Gezi Park on May 31, the first anniversary of the massive protests. The heavy-handed measures of the police were followed by several injuries and detentions in Istanbul and Ankara.