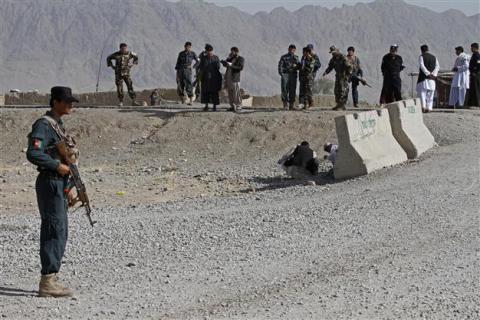 An Afghan policeman stands guard after another bomb explosion in Kabul, Afghanistan, Thursday, May 29, 2014.

A suicide bomber yesterday killed three Turkish engineers and wounded another in eastern Afghanistan in the latest attack on foreigners in the war-torn country, while Taliban denied responsibility.

âAround 7:15 am, a suicide bomber detonated his explosive-packed motorbike, targeting a minibus that belongs to Turkish engineers in the Behsud district of the province of Nangarhar,â Ahmad Zia Abdulzai, a spokesman for the provincial governor, told Agence France-Presse. âAs a result of this attack, three Turkish engineers were killed and a fourth was wounded.â

Abdulzai said the victims were working on the construction of a police center in Nangarhar and were traveling to work when their minibus was attacked.

The Turkish Foreign Ministry condemned the attack and called on Afghan authorities to swiftly arrest the perpetrators. In a written statement, the ministry offered condolences to the families of the victims, Fuat TaÅ, Ãmit Ãnal and Halil GÃ¼l, who were working for the EMTA Construction Company. The company specializes in construction of special purpose buildings for U.S. Army and U.S. State Department facilities in Turkey.

According to figures released by the Afghan Chamber of Commerce, the trade volume between the two countries has increased by 30 percent in the last two years, while Turkish companies have made investments worth $3 billion in the country.

The attack is the latest incident targeting Turks in abroad. A convoy carrying Turkeyâs consul to Mosul, ÃztÃ¼rk YÄ±lmaz, was targeted by a bomb late last month...